Our upstairs bathroom has no heat — no ducts run there — so we have a small electric wall-mounted space heater for cold winter months. We already replaced it once, as the Cadet Company in Washington State issued a recall on it. But that was 20 years ago.

In general it was still working fine, but during the most recent winter it started to come on by itself in the middle of the night, first on colder nights, and as the winter went on, even when it was not so cold. I became concerned that this thing would end up on continuously when we were out of town, overheat, and burn the place down.

Note that the heater does not really have an off switch per se. All it has is a temperature dial, and up until now, turning it to 0 was basically the same as off. But not anymore.

At first, I thought about just replacing it. I spent a lot of time searching around HomeDepot.com and so on, but couldn’t find one that I liked better. Giving up for now, I thought I’d pull the thing out and see if it was just some dirty contacts on the thermostat or something.

So, I turned off the breaker, pulled it from the wall, and expected a filthy dust-ridden nightmare. 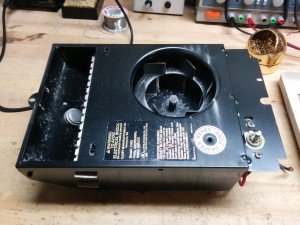 Turns out, not so much. There was some dust, but the airflow must keep it pretty clean. I cleaned up what I could, then moved to the issue at hand.

First, how does this work? The only electrical parts in this thing are:

The fan still runs. The coil still heats. The over-temperature thermal fuse is a one time, non-resettable device that blows when a severe over-temperature condition exists. Since the heater does still make heat, I figure it must still be OK. 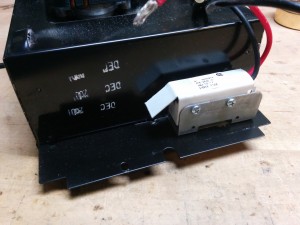 I tried to get a picture from the side, to show how it works. This is not that picture, alas: 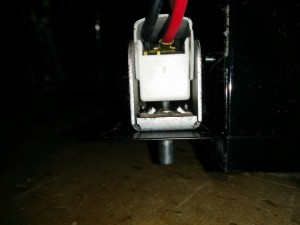 Basically, this thing is a micro-switch, a knob, a bimetallic strip, and a set screw. When the temperature goes down, the strip bends and pushes on the switch, turning on the heater. The set point is determined overall by the knob — it deflects in or out the strip.

But the key to my problem is the set screw, it turns out. This puts a minimum mechanical bias on the strip, so it either is on constantly, or, as you turn it further, requires the knob to be further and further from the off position before the heater will come on. 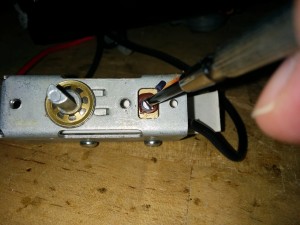 In the end, I could have fixed this without removing the unit from the wall. Oh well. At least now I know!